Alaska’s grizzly and brown bears are among this state’s most intriguing, elusive, large and dangerous Alaska animals. Your Alaska adventure just might not be complete without an Alaska bear viewing tour to see these beautiful bruins in their natural environments. You can photograph and learn about their habitats, hunting and mating habits and watch them in action at one of the many Alaska bear viewing lodges and retreats or along Denali National Park. Whether by land, air or water, or some combination of the three, we will take you to where the bears are, get you close and keep you safe.

Grizzly bears live in the Interior and Arctic regions of Alaska, such as Denali National Park and Gates of the Arctic National Park. “Grizzlies” (as they are fondly referred to locally) tend to eat roots, grubs, and small rodents and because of the difficulty in finding an abundance of food, so grizzly bears tend to be smaller and more aggressive than brown bears. The best viewing option is in Denali National Park but keep in mind they live in a vast wilderness.

Brown bears are found in the coastal regions of Alaska such as Katmai National Park, Lake Clark National Park, and Kodiak Island. When you see these magnificent animals on their home turf roaming freely along the coastline, catching salmon at Brooks Falls, digging for clams, or rearing young against the extraordinary backdrop of Kodiak Island – it’s a moment when you forget everything else and just soak in nature at its best. Bear watching day trips can be added to most itineraries and depart from several locations around the state.

One popular bear viewing option is a visit to the Alaska Peninsula near Bristol Bay, where Katmai National Park’s Brooks Camp offers the iconic Alaska “big bears catching big fish” experience. This is the ultimate in bear viewing – at peak salmon season along the Brooks River, when dozens of bears with powerful jaws and claws hunt for sustenance for days on end. These bear viewing tours will truly give you the thrill of a lifetime!

And for the less adventurous or those who perhaps have less time, you can also observe all breeds of Alaska bears at the Anchorage Zoo and at the Alaska Wildlife Conservation Center south of Anchorage.

Choose from 13 vacations in Alaska related to Bear Viewing 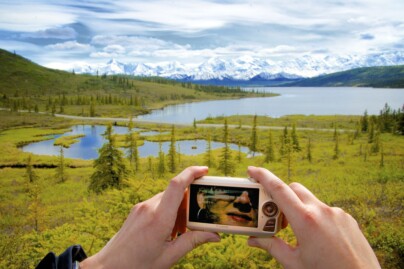 Visit 4 National Parks: Kenai Fjords, Denali, Wrangell-St. Elias and Katmai (or Lake Clark National Park for bear viewing). Plus, an add-on opportunity for a 5th national park with a visit to Gates of the Arctic National Park (please... Browse tour 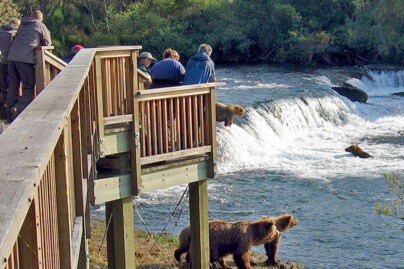 Fly from Anchorage to one of Alaska’s most famous bear viewing destinations, Katmai National Park and Brooks Falls! Depart Anchorage early in the morning on a scheduled flight to King Salmon (approximately 1.5 hours). On arrival, a local representative will... Browse tour Depart from Anchorage by wheeled plane for a 90-minute scenic flight southwest over Cook Inlet toward the Chigmit Mountains. Enjoy spectacular views of the Alaska and Aleutian Mountain Ranges and two active volcanoes – Mt. Redoubt and Mt. Iliamna... Browse tour 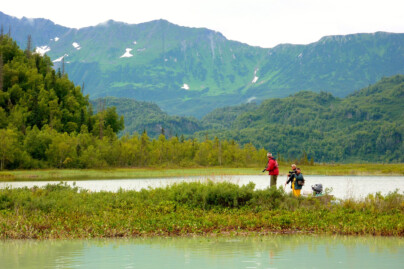 Depart Anchorage on a half-day bear viewing trip to Redoubt Bay Lodge. Redoubt Bay is one of the easiest and most accessible locations for bear viewing from Anchorage. You will travel by seaplane for a one-hour flight along a scenic route across Cook Inlet... Browse tour 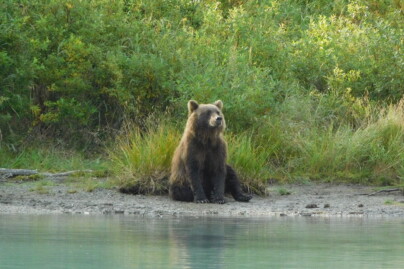 Enjoy a bear viewing day tour out of Anchorage to Lake Clark National Park via seaplane. An Alaska experience of a lifetime! Depart from Lake Hood Floatplane Airport in Anchorage and fly southwest over Cook Inlet toward the Chigmit Mountains.... Browse tour The Kodiak Brown Bear Center, located in the Kodiak National Wildlife Refuge, was developed to offer unparalleled opportunities to observe and learn about the legendary Kodiak brown bear. Enjoy deluxe private cabins with all meals while at the lodge.... Browse tour Enjoy one night exploring Kodiak Island. The next day board an Alaskan bush plane and fly to the remote Katmai National Park coast. On landing, lodge hosts assist with the transfer to the lodge. With a variety of food... Browse tour Depart from the Lake Hood seaplane base in Anchorage, Alaska for a scenic flight to the prime bear viewing habitat at Brooks Falls in Katmai National Park & Preserve. Viewing Alaska from the air in a small plane allows... Browse tour Enjoy a scenic 1 to 1 1/4 hour flightseeing trip out of Homer, Alaska on a scenic flight by small plane which takes you over volcano and glacier-rich scenery to either Lake Clark National Park or the east coast... Browse tour 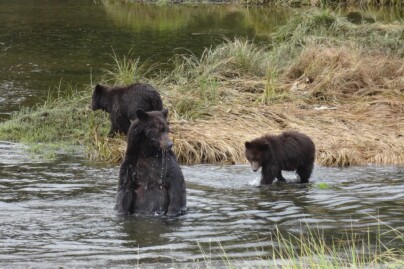 Departing from Anchorage's Lake Hood, it is just a 50-minute flight by seaplane over Cook Inlet to the entrance of Lake Clark Pass. Nested in a 171,000 acre critical habitat area, Redoubt Bay Lodge has three rustic cabins and... Browse tour 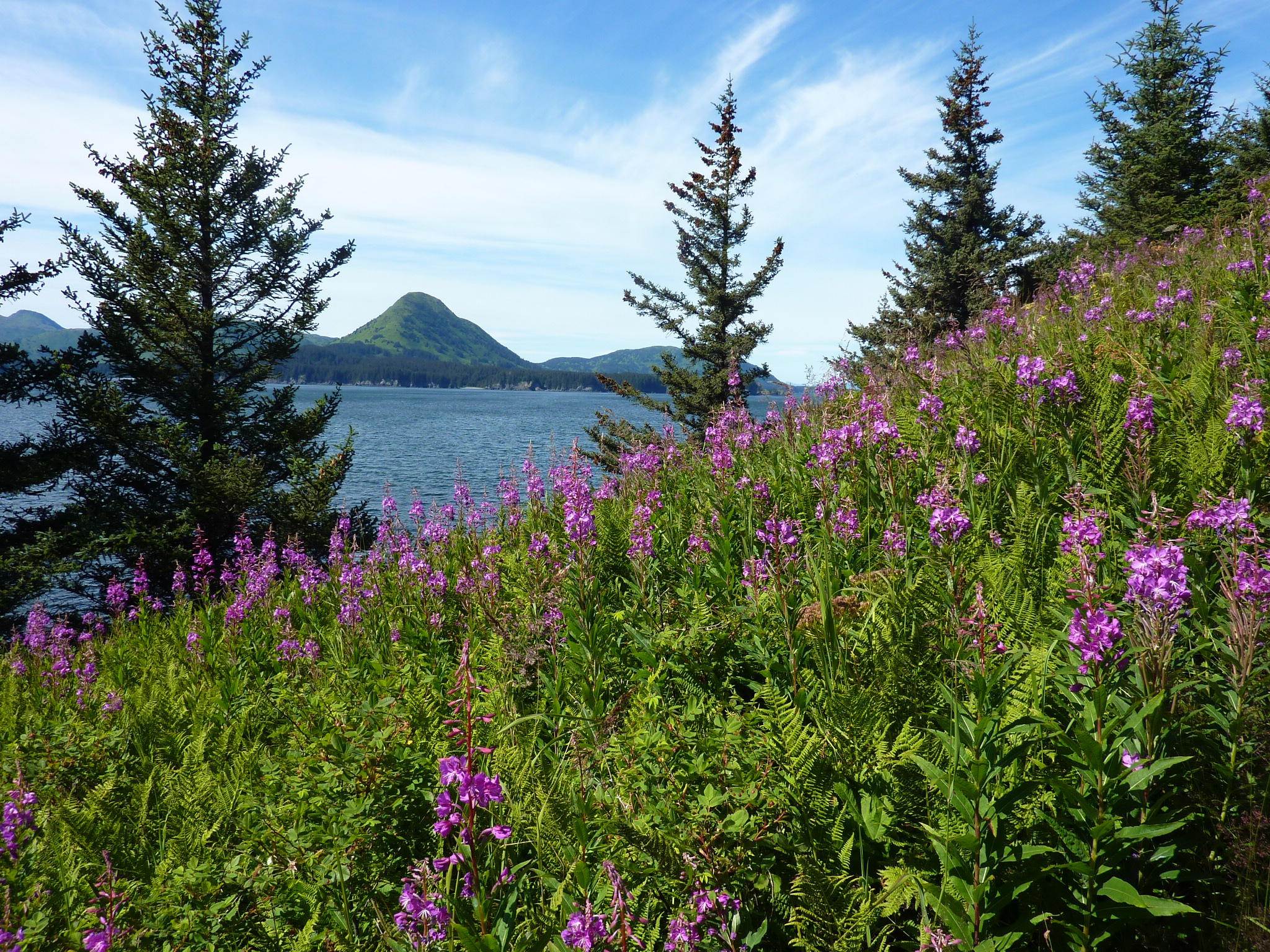 Fly from Anchorage on a schedule flight, and then embark on excursion aboard a classic sea plane to enjoy a bird's eye view of the Island's scenic coastline and soaring mountain peaks. Kodiak is the second largest island in... Browse tour