The Alaska cities of Palmer and Wasilla lie in the Mat-Su Valley or “The Valley”, as it’s known by locals, just 45 minutes from Anchorage en route to Denali National Park. This Alaska region was carved by glaciers and is bounded by the Chugach and Talkeetna mountains as well as by the Alaska Range. These towns are two of the fastest growing regions of Alaska, due to their proximity to Anchorage and the city’s country lifestyle.

The fertile farmland in the Palmer area of Alaska was first colonized in the 1930’s under a U.S. Government “New Deal” agricultural experiment. Today, the area is known as “Alaska’s breadbasket” as rich soil and long daylight hours allow local farmers to grow record setting vegetables, including 100 pound cabbages and 40 pound beets! These impressive giants are on display at the Alaska State Fair in August.

Nearby Wasilla, Alaska is the home of the Iditarod Trail Sled Dog Race, known as “the Last Great Race on Earth“. Many Iditarod mushers call this area their home. Other Wasilla attractions include Independence Mine State Historical Park, as well as a reindeer and musk ox farm.

Begin your visit to Palmer and Wasilla here:

Choose from 2 vacations in Alaska related to Palmer - Wasilla A one hour drive from Anchorage brings you to Alaska Glacier Lodge and the base of Alaska’s Chugach Mountains. From Alaska Glacier Lodge’s base you will take a breathtaking 15 minute helicopter ride up to Knik Glacier. During the flight you will see turquoise melt... Browse tour 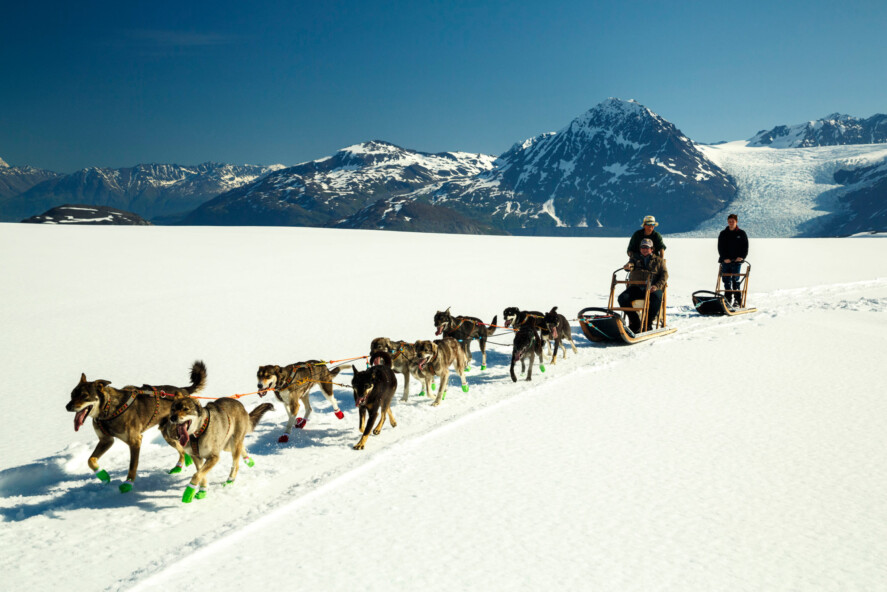 This day tour from Anchorage is just a 1-hour drive away from the city and includes flightseeing and dog sledding, an unbeatable combination for any Alaska visitor interested in active outdoor recreation! From Alaska Glacier Lodge’s base you will take a breathtaking 15-20 minute... Browse tour