Wrangell is located on the northern tip of Wrangell Island, an island in the Alaska Panhandle and 155 miles south of Alaska’s capital of Juneau. One of Alaska’s most historic and oldest towns, Wrangell is named after the island, which was named after Ferdinand Petrovich Wrangel, a Russian seafarer and the head of the Russian-American Company from 1830 to 1835. The town is an interesting mix of Alaska Native culture, industry and tourism with a history dating back to Russian rule. Originally Wrangell was the site of a stockade built to fight off Canadian fur traders then drifted into British control and eventually became American.

Wrangle lies across the narrow Zimovia Strait from the mouth of the Stikine River on Alaska’s mainland. The Stikine River, which reaches the ocean near Wrangell, was an important historical trading route to the Canadian interior and a powerful influence on Wrangell’s rich Native heritage. At the mouth of the river lies Garnet Ledge, the source of many of Alaska’s garnets. The ledge was deeded to the local children, who have exclusive rights to mining and selling the beautiful stones. Wrangell also boasts the highest concentration of petroglyphs (ancient rock carvings) in southeastern Alaska.

Choose from 3 tours related to 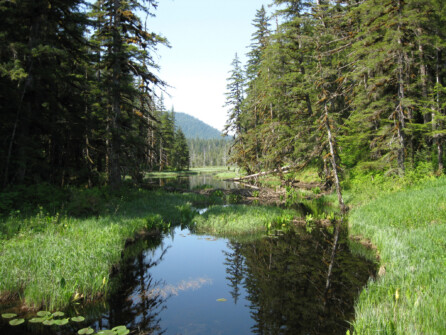 Anan Creek is located in Tongass National Forest in Southeast Alaska, 35 miles south of Wrangell. A 45 to 60-minute jet boat ride will bring you from Wrangell through the Eastern... Read more. This jet boat tour from Wrangell up river on the Stikine River takes you through pristine wilderness and into a region of wildflowers, forests and alpine country, through Shakes... Read more. From Wrangell travel by jetboat to LeConte Bay where you will see North America’s southernmost tidewater glacier. The LeConte Glacier calves frequently filling the bay with... Read more.