Alaska’s Southwest region includes the Aleutian Islands, the Yukon and Kuskokwim River deltas, and the Alaska Peninsula. This area is particularly famous among birders and brown bear wildlife photographers. Each year, dozens of rare bird species fly through Southwest Alaska on their migration route to summer in the Arctic. Large brown bears are consistently spotted at such locations as Brooks Falls, McNeil River and Lake Clark, drawing wildlife enthusiasts from around the world.

The Southwest region of Alaska is part of the Pacific Ocean’s “Ring of Fire” and is dotted with volcanoes. The largest eruption in North America occurred at Novarupta Volcano in Katmai National Park in 1912. Mt. Redoubt has been recently active, as well as Mt. St. Augustine and Mt. Kasatochi.

The two national parks in Alaska’s Southwest are Lake Clark National Park and Katmai National Park. Both parks are renowned for fishing and bear viewing. Brooks Falls, located in Katmai National Park gives visitors the chance to see bears fishing for salmon at the top of a waterfall. Numerous other nationally and state protected lands keep much of Southwest Alaska wild. The communities in this area are predominantly Alaska Native villages with communities including the Aleut, Alutiiq, and Yupik tribes.

Fishing in Alaska, including crabbing as seen on the Deadliest Catch television show on the Discovery Channel, is a major industry in the region. Alaska fishing lodges, such as Zachar Bay Lodge, offer both an excellent opportunity to fish in Alaska’s wild waters, but also to see the abundant wildlife.

There are no roads connecting southwest Alaska to the rest of the state. While there is limited state ferry service and some cruise ships visit this region, the vast majority of visitors fly from Anchorage or Homer to their destination. There is scheduled air service to Dutch Harbor, Adak, Kodiak, King Salmon, and St. Paul on the Pribilof Islands. Private lodges, bear viewing areas, and remote fishing streams can only be accessed by float planes and bush planes.

Choose from 16 tours related to Depart from Anchorage by wheeled plane for a 90-minute scenic flight southwest over Cook Inlet toward the Chigmit Mountains. Enjoy spectacular views of the Alaska and Aleutian... Read more.

Redoubt Bay Bear Viewing (half day) Save to Favorites Redoubt Bay is one of the easiest and most accessible locations for bear viewing from Anchorage. This half-day bear viewing trip to Redoubt Bay Lodge provides a good opportunity... Read more. A Lake Clark National Park bear viewing day tour out of Anchorage via seaplane provides an Alaska experience of a lifetime. Depart from Lake Hood Floatplane Airport in Anchorage and... Read more. The Kodiak Brown Bear Center is located in the heart of the 1.9 million acre Kodiak National Wildlife Refuge on Karluk Lake. The Kodiak Refuge is on one of the most productive... Read more.

Katmai Wilderness Lodge Save to Favorites Located on the Katmai Coast and in Katmai National Park, this lodge offers one of the most unique bear viewing experiences in Alaska. Imagine being able to safely stay at a... Read more.

Bear & Wildlife Viewing Flight Safari from Homer Save to Favorites Enjoy a scenic 1 to 1 1/4 hours day trip out of Homer, Alaska on a scenic flight by small plane which takes you over volcano and glacier-rich scenery to either Lake Clark National... Read more. Fly from Anchorage to the world’s most famous bear viewing destination, Katmai National Park and Brooks Falls! Depart Anchorage early in the morning aboard a scheduled flight... Read more.

Redoubt Bay Lodge Save to Favorites 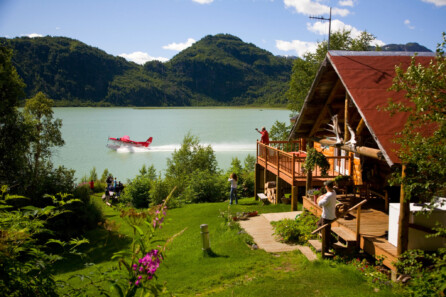 Redoubt Bay Lodge is a rustic nature lodge located 50 miles southwest of Anchorage at the entrance to Lake Clark Pass on the shores of Cook Inlet. This classic Alaska adventure lodge... Read more.

Alaska Homestead Lodge Save to Favorites Alaska Homestead Lodge is nestled at the foot of Mt. Iliamna in Lake Clark National Park and near Silver Salmon Creek, a place of unsurpassed beauty. The lodge is reached via airplane... Read more.

Zachar Bay Lodge Save to Favorites Zachar Bay is located in the heart of Kodiak Island National Wildlife Refuge. Zachar Bay is the perfect nature lodge for a great Alaskan wilderness vacation. You can choose daily... Read more. This tour is not available in 2022! Enjoy a 2 or 3 day Alaska bear viewing tour at Brooks Falls. Brooks Falls, located in Katmai National Park, is world renowned for its incredible... Read more.