Traveling in Denali National Park, it’s easy to find yourself constantly gazing skyward for a glimpse of The Great One – Denali. A sighting of the majestic mountain and precarious peak, as well as its summits and spurs, will take your breath away. The experience also provides instant perspective on how massive the mountain really is (20,310 feet tall) and how minuscule we humans really are. And Denali is in good company. Many nearby mountains of the Alaska Range share some pretty rarified air, too – Foraker at 17,000-plus feet, Hunter at 14,000-plus feet, and many more in Alaska’s 10,000-feet-and-up club. While Denali National Park’s namesake may get the most glances, shift your focus down the mountain and you’ll observe some of the park’s residents that are equally exciting and photogenic. In fact, a who’s who of amazing Alaska animals live in Denali National Park – from moose to bears (black and grizzly), caribou to wolves, Dall sheep to red foxes, Golden and Bald eagles to Alaska’s State Bird, the ptarmigan, and so many more. The Alaska wildlife in Denali National Park is wide and wonderful: 39 species of mammals, 14 species of fish, more than 160 species of birds, and even one species of amphibian – check it out, the wood frog!

If a clear view of Denali on a blue-sky day is breathtaking, seeing an enormous mama grizzly bear with her burly, furry yearling cubs chomping on a patch of blueberries is practically heart-stopping – even from the safety of your tour bus seat. Then again, any bear sighting is thrilling and something you’ll never forget, whether it’s a black bear walking without a care along the Denali Park Road or even as a dark speck on the distant tundra. Bear family at home in their natural habitat.

Wolves are very smart and elusive, very beautiful and mysterious, and very popular attractions for Denali Park visitors. As of Spring 2018, around 80 wolves from as many as 10 packs traversed the area, many along the park’s east end of Denali Park Road. If you’re going to spot a wolf in the wild during your Alaska travels, or even your world travels, it is more likely to happen here than anywhere else. And seeing a wolf, or a wolf pack, is a rare encounter that’s certainly something to howl about. Even hearing them is an exhilarating experience. Sit quietly in the evening under the midnight sun or fall dusk and you might hear wolves communicating with one another over distances nearby and faraway. Usually it’s a solo act or duet, but on special occasions it can be a full-blown orchestra of high-pitched barks and deep-lunged howls that fill the air with primal sounds and cover your arms and neck with goosebumps.

Denali’s moose might not be as awestriking or intimidating as its bears or wolves, they’re still a pretty big deal. Like 1,000-plus-pounds-heavy, 6-plus-feet-tall big. And their park population is big, too. Nearly 2,000 of these unique ungulates roam Denali Park and they are truly as iconic and interesting as their furry counterparts. You’ll fawn over a moose and her calves, and be blown away by a bull with splendid antlers. Seeing moose never gets old ­­– no wonder they’re Alaska’s state animal. If you come upon a caribou in Denali Park, you might think you’re seeing double or even triple. These nomadic mammals usually congregate in herds, some small, some large, all awesome. The park has its own herd, in fact: the Denali Herd, which had as many as 3,000 members in recent years. While their bodies and antlers are thinner than those of a moose, caribou are just as impressive. Their course, even wooly, fur changes colors with the seasons, from brown to gray with streaks of black and white. And what their antler racks lack in girth, they stand out with in width and complexity.

The higher you ascend into the park’s elevation, the more likely you are to see Denali’s Dall sheep and their legendary curled horns. Incredibly nimble and seemingly fearless, they spend most of their time skillfully stepping along the steep slopes, dangerous cliffs and loose-rock ledges of the region for travel, for foraging, and for safe resting from predators. Being that their fur is usually a bright white or at least a dirty eggshell, they are pretty easy to spot if you actively look for them. If you aren’t attentive, though, they can appear to be just another clump of snow or rock on a hillside or mountainside – nothing unusual there. The real treat is seeing them up close, which can occur when you enter the alpine areas. Sometimes they’re suddenly hanging out right above you, the rams rocking their imposing curled horns and the ewes with their less-curled, less-bulky but just as daunting horns.

What other animals might you see in Denali Park? Wolverines – yes, wolverines! Coyotes, red foxes and snowshoe hares, of course. On the smaller, often speedier, side of the species spectrum are marmots, squirrels, pika, minks, martens, ermine and weasels, lemmings and shrews, among so many others.

The park also provides a bounty for Alaska birdwatchers. Up in the sky or perched high on a tree, and often on the lookout for mini-mammals, you can see an aerial array of eagle, hawk, falcon and owl species. The park is also home to ducks, geese, swans and loons, sandpipers and hummingbirds, and Alaska’s feathered favorites like Arctic terns, ptarmigan and grouse, to name just a few.

A few pro tips: There are never any 100 percent guarantees when it comes to Alaska wildlife sightings, but you can improve your odds considerably by being diligent, bringing binoculars, and tapping the knowledge of your fellow park visitors and the park’s workforce, particularly the drivers, guides and rangers. Animals can be anywhere, but they’re easy to miss if you aren’t watchful – their fur and feathers are natural camouflage, after all. 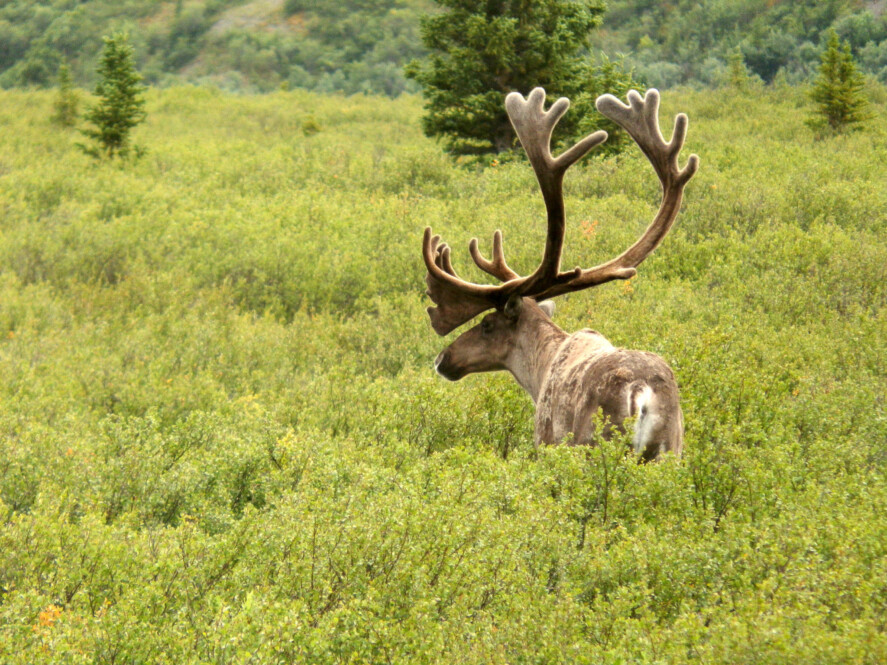 Beyond binoculars, bring your camera and gear (charged batteries and memory cards!), and a phone with an extra battery charger – you probably won’t get a signal, but that camera will come in handy. Also, be bear aware and animal alert at all times. Don’t feed or approach any animals, and always keep a safe and respectful distance. And take extra care of your belongings and food and trash items. While you never want to find a bear digging through your stuff, ravens and squirrels can make a bigger mess much faster.

The biggest tip of all: have fun and soak up every sighting! You’ll experience first hand Alaska’s finest furry and feathered animals thriving in their natural habitat, one of the world’s grandest and most pristine places.