Alaska’s animal attractions are one of the major reasons that makes traveling around Alaska such a special experience. Spotting Alaska’s wildlife – furry or feathered, swimming or flying, instantly creates thrills and chills, big grins and hopefully a few – or a lot of – great pictures and lasting memories for both visitors and locals alike.

Alaska’s all-star animals range from small (fox, puffin, and beavers) to medium sized (eagles, otters, and sheep) to large and extra-large (bears, moose, and whales). Some are seemingly and surprisingly everywhere you look (moose) while others are so elusive you are lucky to even spot them (wolves). And while all of these species have survivalist lifestyles that revolve around food, food, more food and some occasional rest and frolicking, they all have their own singular routines and patterns: some spend their winters hibernating, others migrate to and from Alaska depending on the season, and others roam the state year-round, from the warmest brightest days of summer to the dark and cool winter nights. You can increase your odds of seeing Alaska’s diverse wildlife best by connecting with local Alaskan wildlife guides who will share their deep knowledge of these natural wonders with you and guide you to the best spots for spotting Alaska’s coolest creatures. Just remember that experiencing Alaska’s animals comes with a disclaimer: some may look cute and cuddly, but remember – they are still wildlife, with an emphasis on “wild”. For your safety and for the safety of these amazing animals, do pay them the respect of keeping your distance and minimizing distractions during any interactions with them.

How and When to Maximize your Chances of Spotting Alaska Wildlife

Alaska’s bruins are the MVPs of Alaska animal viewing, the creature that every visitor wants to see … at least from a safe distance. They are fascinating but ferocious, precocious and powerful. Many travelers build their entire Alaska trip around watching these meandering mammals as they feast in fish-and-berry-eating action, while others add into their itineraries a day trip to a bear viewing hot spot such as Lake Clark or Katmai National Park.

The best time to see peak bear activity is peak Alaska summertime (June through August). That is when salmon fill the rivers and streams, berry bounties blanket the brush and tundra, and bears are practically eating around the clock to fatten up for their long winter hibernation. Not all bears spend their winter sleeping, though. Alaska’s powerful polar bears remain active in the Arctic through the toughest of winter conditions, which means they can be spotted year-round. However, you will have to travel very far and be a little lucky (with help from a guide) to spot these majestic white bruins in the wild. 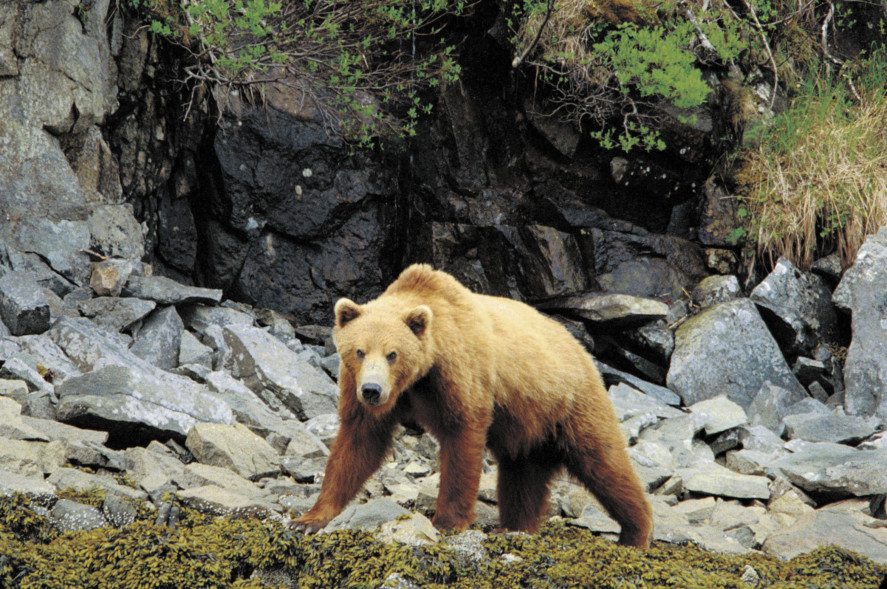 Spotting a moose in Alaska can be as easy as driving to and from the airport. Alaska’s official state animal can be found just about anywhere in the wild, as well as strutting and snacking around suburban and urban areas such as Anchorage and Fairbanks. Seriously! When an Alaskan calls into the office saying they are running late because there is a moose in their driveway blocking their vehicle, it isn’t a creative excuse to skip work.

Moose can be seen year-round in Alaska, but they are especially active in the fall during mating season, when groups gather in close proximity to one another. During the winter, they often spend time in urban areas and on plowed streets and sidewalks to avoid exhausting travel through deep snow and in the spring and summer, they are everywhere enjoying foraging on blossoming tree leaves and plants. If you are visiting one of Alaska’s classic port towns from spring to fall, keep an eye on the water whether you are on a boat, kayak, or beach. You never know when a humpback or gray whale may breach for a quick breath or a big splash. Whales live a migratory existence and most head far south to Hawaii (humpbacks) or to Baja (Grays) to breed when the winter months arrive, so summertime is the best time to see them in Alaska. Summer, not coincidentally, is also the busiest time for whale watching tours, as well as fishing charters, which can add bonus whale views to any casting action. Gray whales head south April through June when they pass by the Kenai Peninsula and Kodiak. Killer whales can be seen year round in Alaska’s coastal waters and the critically-endangered Beluga whales can be found in Cook Inlet near Anchorage, in Bristol Bay and the Arctic.

America’s iconic symbol of freedom, the bald eagle, flies high in the Alaska skies, though you are just as likely to see them perched atop a tall tree taking a break and searching for a snack. Birders will be delighted to know that eagles can be seen year round and live up to their legend – they are surprising large and practically fearless. On an Alaska birding tour, your heart will soar when you see one, which you can do all year – they are fairly easy to spot due to their distinctive markings and impressive wingspan. Like moose, Alaska’s caribou sport a set of fancy antlers and are active all year round in Alaska. Unlike moose, they prefer to travel in herds and usually far away from human activity. To see them, you may have to do some off-the-grid travel or a long road trip to the Arctic/Sub-Arctic regions. Seeing a large hustling herd of caribou is like watching the Earth move while you remain still. From the air, it is equally impressive watching these nomadic wanderers travel over large chunks of tundra. Their dense fur changes color with the seasons to give them a natural camouflage from predators: brown in the summer, gray in the winter. The old saying “busy as a beaver” certainly rings true for this Alaska animal, especially during summer. That is when these furry, funky rodents with the big flat tails and chisel-like teeth are hard at work on their perpetual home improvement projects 24-7 under the Midnight Sun. Wander by a pond in Interior Alaska in the summer and you may spot a beaver hard at work. Beavers do not hibernate, despite widely held myths to the contrary, but they are tough to find in the winter. They slow down and lay low during winter’s cold days and nights, preferring to sticking close to their homes.

These two majestic birds, while quite different in size and appearance, share migratory lifestyles and attention-grabbing looks. Birders in Alaska cannot get enough of these annual summer visitors, as they nest and settle in fields across the state during and in between their migrations in April and August. Like Alaska’s summers, the opportunity to see these birds are fleeting – when fall arrives, the birds depart and most easily seen in the sky flying south. Most head far out of state, though some geese end up wintering in the milder Southeast Alaska.

Speaking of Alaska’s fascinating feathered “frequent flyers”, the colorful puffin has personality and style worth preening about. These beautiful seabirds have black-and-white bodies with distinctive features of orange or yellow bills and feet, along with flashy horned feathers around their eyes. They cruise the waters of Alaska’s Southern coasts and port towns all summer, looking for fish. Even their flight patterns are distinctive, as they fly so low to the surface of the water that their wingtips often clip the water and make small splashes. The best time to see puffins in Alaska is spring to fall, when kayaking and wildlife-and-glacier cruise tours are in full swing for visitors. In the winter, these pretty birds head out to deeper waters far from land. These adorable explorers are always on the move and always on the hunt. There is no hibernation for Alaska’s foxes, so they are active all year. But shoulder seasons like fall and spring are the best times to spot them as their fur starts to change to blend in with the upcoming seasons. Wherever there’s prey, you will have a chance to see them, including on the outskirts of Anchorage. They are careful and crafty, but also very curious, so they are occasionally visible in unexpected places. Dancing with the foxes – KBBC

Two of the most mysterious and fascinating of Alaska’s animals, wolf and wolverines, are also some of the toughest to find for visitors. Their respective survival depends on their stealthy movements, ability to travel long distances, and killer instincts, which also unfortunately, makes them really difficult to spot. What makes viewing opportunities possible, however, is that wolves stay active all year and often travel in packs which makes them slightly easier to spot. And while wolves’ fur often changes with the season to help them blend in, wolverines keep their mostly dark fur all year. If you happen to see one of these animals,  consider yourself lucky: you hit the Alaska animal viewing jackpot.

This unusual Alaska animal can be found waddling around the state year-round. While porcupines spend most of their time grubbing in forests and on rich tundra, they are also attracted to Alaska’s roadways, especially in the winter and spring. They love licking the salty residue left on the roads by plows and snow removal trucks. That makes these big lumps of quills and fur easy to spot. Just try to avoid them on the roadways if you are driving!

These two brave-and-bright-white mountains climbing machines are easy to spot year round as they traverse across Alaska hillsides and peaks. In fact, just a short drive or train/bus ride south of Anchorage along the steep cliffs of Turnagain Arm and the Seward Highway allows perfect dall sheep viewing opportunities, especially in summer months as their white fur pops off of the dark, rocky backdrops. But anywhere there are peaks in Alaska (practically everywhere), there is a chance to see a Dall sheep or mountain goat. If you are hiking, simply sit down and scan the surrounding mountains. If you see a white spot, or a group of them, you’ve found a herd of sheep or goats. These beautiful large cats do their best to blend in with their surroundings and use their catlike skills and big padded paws to move in relative silence and secrecy. That said, they are not scared to make appearances or back down from a human encounter. In fact, the best chance to see them at any point of year is to spend time on Alaska’s trail system, whether walking, snowshoeing, or skiing. If you move quietly and keep your eyes peeled on the forest around you, you might be surprised (and delighted) with your first lynx sighting.

Seeing a muskox might be the closest thing to seeing a creature from prehistoric times. These burly critters with thick, wooly yet shockingly fine fur thrive in the Arctic and are active all-year round, no matter the weather. Since they are huge mammals with dark fur and often travel in groups along barren tundra areas, they tend to stand out. So, the likelihood of seeing them, if you manage to get into the areas they frequent, is pretty decent year-round. Whatever the season and wherever you travel in Alaska, you’ll be lucky to experience the state’s diverse wildlife in unique encounters you won’t soon forget. Just make sure to bring your camera or phone. You’ll be glad you did