The Majestic Mountains of Alaska – Denali to St Elias to Redoubt

When people think of Alaska mountains, their minds instantly go to Denali, formerly Mt. McKinley. And for good reason: Denali is North America’s tallest peak and easily Alaska’s most popular. The mountain is magnetic to climbers, sightseers and Alaskans, who visit its namesake park by the thousands. Witnessing this iconic mountain on a clear day, standing tall in all of its glory, makes it easy to understand why it is known as “The Great One.” Hikers in the shadow of Denali (c) Jeff Schultz/Schultzphoto.com

But with all respect due to Denali, there are countless amazing Alaska mountains to be awed by. Eighteen of these peaks loom larger than 14,000 feet and did you know that the 10 tallest peaks in America are all perched in Alaska? There’s a seemingly endless jigsaw of pretty mountain landscapes among the state’s eleven mountain ranges, including the three major ranges that stand apart in mountainous mass and magnitude: the Alaska Range, the Brooks Range, and the Aleutian Range. 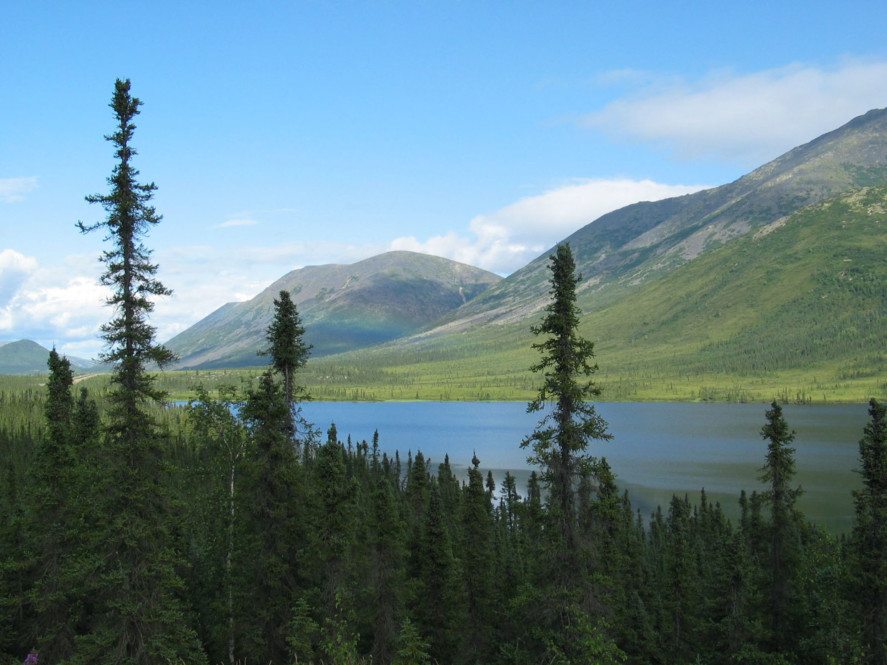 There are also plenty of Alaska mountains to hike up and to ski down – some offer outdoor fun for all ages and fitness levels, some present the ultimate challenge for the most talented and hardcore alpine adventurists. Some Alaska mountains are nestled in glaciers, while others occasionally blanket nearby areas with ash. The state has more than 100 volcanoes and volcanic fields, including three-quarters of U.S. volcanoes that have erupted in the past 200 years. While hundreds of the mountains that make up Alaska’s luminous landscape are relatively anonymous to all but the biggest peak geeks, a few magnificent mountains have legends that fuel Alaska’s folklore.

But when it comes to Alaska mountains, altitude isn’t everything. In fact, three of Alaska’s most recognizable and popular peaks aren’t even in the 5,000-foot club: Flattop Mountain (3,245 feet) with its distinctive, yes, very hike-able flat peak in southeast Anchorage; Mt. Susitna (4,396 feet) (aka Sleeping Lady) with its distinctive form of, well, a sleeping lady across Cook Inlet to the northwest of Anchorage; and Mt. Marathon (3,000-plus feet) in Seward, which might not be tall but holds special Alaska lore.

Flattop Mountain is so well-known, it’s attained single-name celebrity status and is known simply as Flattop. The Glen Alps trail head and parking area that is the access point to Flattop and numerous other Southcentral Alaska walks and hikes are just 14 miles from downtown Anchorage. That proximity, the mountain’s unique shape, the spectacular views that start at great in the parking area and get better every foot you ascend, and the variety of hiking trails (short and easy to long and challenging) make Flattop Alaska’s most hiked mountain. The hike to Flattop’s top is rewarding but also steep, strenuous and covered with loose and big rocks; many visitors are perfectly content taking a short walk around the area and soaking up views of Anchorage, Cook Inlet, Sleeping Lady and even Denali on a clear day. Flattop is set in the Chugach Range, which has many mountains that are local hiking favorites. Directly across Cook Inlet from downtown Anchorage along Knik Arm rests Mt. Susitna, also known as “Sleeping Lady”. Its unique shape looks more like a massive mound than a mountain. Look closer and suddenly you’ll make out the form of a woman on her side, hair flowing down to the Earth. It’s inspired many stories about the woman and the mountain. It’s also a pretty sight, especially when the sun sets behind it at certain points of the year, when it’s blanketed in alpenglow or covered in snow in the winter. Unlike Flattop, this isn’t an easily accessible mountain. In fact, it’s off the road system and it’s an epic adventure just to reach it, much less climb it. Few Alaskans have been to it, but locals and visitors alike all enjoy the view of this legendary South Central Alaska landmark.

Standing steep and ominous above the fun and friendly fishing town of Seward, Mt. Marathon is a downright tough hike that’s only for the fit and fearless. But that doesn’t stop hundreds from climbing it every year, each carrying on an Alaska legend. The tale is fuzzy and takes many forms, but it boils down to a bar bet in the early 1900’s, with one man wagering that another man couldn’t make it to the top of the mountain and back from downtown Seward in less than an hour. That inaugural racer missed the mark by 20 minutes, but an Alaska-sized challenge was born and many began testing themselves against the peak. Soon, it became an official race, which today transforms Seward into party central each Fourth of July – hundreds of people racing up and down the mountain, thousands of spectators cheering them on. And that one-hour mark? It’s now been smashed countless times, with Alaska’s David Norris crossing the finish line in a record-setting, and somewhat unbelievable, 41 minutes and 26 seconds in the 2016 race.

That tremendous trio isn’t Alaska’s only memorable mountains. Denali is surrounded by 10,000-plus-foot high peaks in the Alaska Range, with neighbors Mt. Foraker and Mt. Hunter standing out. They are breathtaking in their own right at 17,400 feet and 14,573-plus feet respectively. In the mountain-packed Wrangell-St. Elias, Mt. St. Elias is enormous at 18,009 feet.

Less than an hour drive south of Anchorage is Girdwood, home to Mt. Alyeska (just under 4,000 feet) and its namesake ski resort, which hosts thousands of skiers and hundreds of hikers every year. Don’t feel like breaking a sweat or carving some powder? Hop in the resort’s tram, which is a thrill and leads to picture perfect views and even great food. Juneau’s Mount Roberts (3,819 feet) also has a trail and tram, and packs one of Alaska’s best bang-for-your-buck views of the state’s capital city, harbor and Douglas Island below.

And finally, you probably don’t know that Alaska is also home to more than 100 volcanoes, including a few that rank as restless. Modern Alaskans best know of the infamous and ash-spewing Mount Redoubt (10,197 feet tall, 110 miles southwest of Anchorage), which dusted Anchorage and Kenai Peninsula communities in ash in 1989 and 1990 followed by an understated eruption in 2009. Also infamous is Mt. Spurr (11,070 feet tall, less than 80 miles from Anchorage), which erupted three times in 1992 following a historic eruption in 1953.

What Alaska mountain will be your favorite? Find out by visiting Alaska next winter or summer