Kodiak Island juts out of the Gulf of Alaska with a rugged beauty all its own. Snow-capped mountains, dense old growth forests, rocky cliffs, wildflower-laced meadows, and sandy beaches are the foundation for this stunning landscape. The southwestern areas on Kodiak Island together with Uganik Island, the Red Peaks part of Afognak Island and Ban Island are part of the Kodiak National Wildlife Refuge. The Refuge is world renown for its many rivers (habitat to all 5 species of Pacific salmon along with steelhead trout, Dolly Varden and other fish species) and plentiful populations of  brown bears and bald eagles.

In 1912, a massive volcanic eruption 100-miles to the east of Kodiak Island rained thick ash across the island for three days, completely blocking light from the sun. Over time that ash would fertilize mountainsides and forests creating the bright green landscape of Alaska’s “Emerald Isle”, Kodiak Island. “My husband and I planned an anniversary getaway to Kodiak Island. Flying in, I was struck by how green everything seemed from the air. It reminded me of flying to Hawaii, with nothing but ocean for miles of flying and the thrill of seeing the bright green islands for the first time in the distance.

We spent two days exploring the island by car. Although the road system provides access to only a fraction of the island, we were in no shortage for adventure.  Our first day was spent touring around the Chiniak Highway. This two-lane road winds through the mountains and along several bays with pull-offs for photo opportunities and hiking. We passed a group of Alaska birders with tripods set up along a beach and some back country fishermen returning from a hike to a hidden stream. A small family of Sitka Blacktail deer grazed in a meadow.

After about an hour of driving, we turned onto Pasagshak Bay Road heading towards the ocean. Bright green mossy hills hugged the road as it wove its way around the bay. We crested a hill and suddenly it was ocean for as far as the eye could see. We parked near the end of the road and hiked into an area known as Fossil Beach. Steep mossy cliffs carved out coastline. A narrow sandy trail led us to the bottom of a rocky bluff. Here, hundreds of little fossilized shells and plants were scattered along the rock wall like wallpaper.

Leaving Fossil Beach, we were unexpectedly stalled for 15 minutes as a large group of bison made its way across the road. Bison were introduced to the island in the 1990’s as an alternative to cattle. Cattle ranchers had been losing dozens of cattle to brown bear each year. The bison roam freely and are a spectacle to come upon. We enjoyed watching a group of surfers frantically pack up their tent as the bison surrounded their campsite. 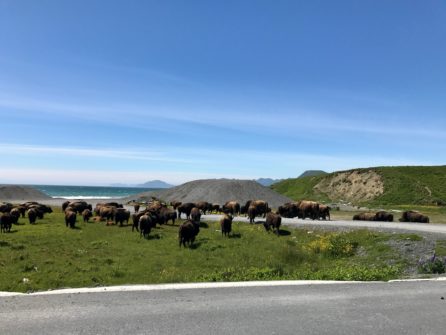 Back in the town of Kodiak, we rounded out our day exploring the island with a pint at Kodiak Island Brewing Company. Their taproom has a laid-back atmosphere with several of their craft beers on tap. We bought stickers and pint glasses to take home with us.

We spent the next morning sightseeing in town. The Kodiak Fisheries Research Center provided a look into the marine biodiversity in the area with a large free-standing aquarium, touch tank, and interpretive displays. We gained a deeper understanding of Kodiak’s Russian heritage at the Baranoff Museum. The Alutiiq Museum is also well worth a visit and pays tribute to the Alaska Native culture of the region.

That afternoon, we drove north of town to Fort Abercrombie State Historical Park. The park has several interpretive trails that tell the story of the World War II activity in the area. A coastal defense installation during the war, the public can now tour old bunkers and see the cannons once stationed here for military defense. We hiked along a bluff with pockets of wildflowers that seemed to be around every turn. The forest here is lush with big old-growth Sitka Spruce and bright green vegetation. Our day ended a little farther to the north at White Sands Beach and Monoshka Bay. We noticed several cars parked at the end of Monoshka Bay Road (one of only two roads north of town) and found a small sign in a tree pointing to a trail for beach access.  After a short walk through the trees, the trail opened up to a beautiful white sandy beach. It was one of Kodiak’s occasional, sunny summer days. A few families were having picnics while children waded through the shallow waters of the small cove.  Alaska has very few beaches with sandy shores and waters warm enough to swim in without a wet suit. I felt like we had stumbled upon a hidden treasure finding this beach. We enjoyed the tidepools and watching paddle boarders in the distance.

If I had a special tip for travelers coming to Kodiak, it would be to bring a swimsuit. If you catch it on the right day, Alaska’s Emerald Isle can feel like Hawaii.”

Check out our Kodiak Island Bear Viewing 2-day trip for other ideas about how to enjoy the many treasures and wildlife of Kodiak Island in Alaska.