Dog Sledding in Alaska: From a Cultural Pastime to a Thriving Sport

Dog mushing and dog sled racing have held a strong magnetism for the affections of Alaskans, Alaska visitors, and doggie day dreamers for centuries. Many eras ago, loyal and hard-working dogs pulling sturdy hand-built sleds were an integral part of Alaskan’s lives in the winter. The sled dogs provided the horsepower for essential and efficient travel, hunting and trapping, transporting items and humans large and small, and much more. Alaska Native people, ambitious pioneers, and Gold Rush adventurers were especially fond of dogsleds as a form of transportation, whether they were exploring their respective regions for subsistence and survival or traversing across the vast state to prospect hot spots or stock critical supply hubs. The start of an Alaska dog sledding adventure.

Eventually, Alaskans love of dog sledding and their appreciation of these special pups and their amazing pulling power, along with the competitive fire of their human drivers, evolved into the sport of dog sledding. Sled dogs were bred to become faster, stronger dogs and mushers constructed sleeker, swifter sleds for racing. 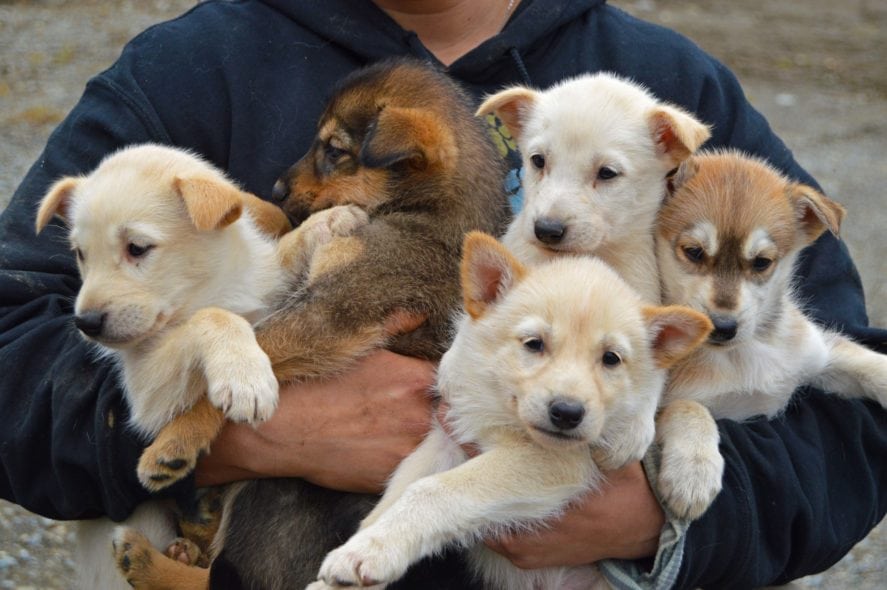 Historically, Alaska’s most notable early dog sled racing took place in Nome, which remains a mushing hotbed. The All Alaska Sweepstakes started in 1907 and traveled a grueling 400-mile out-and-back trail from Nome. Today, the All Alaska Sweepstakes is a distant and fond memory, but Nome remains the heart of Alaska mushing as its Front Street marks the finish line of Alaska’s most famous race: the Iditarod Trail Sled Dog Race, an annual 1,000-mile race between Anchorage to NomeToday, sled dog racing or “mushing” is commonplace all around Alaska. Today, some mushers still own sled dog teams to help out with practical work around their remote homesteads. And other urban recreationalists keep just enough dogs to enter occasional fun races in their local circuits. But others make mushing their lives, keeping a kennel of dogs and participating in highly competitive racing events. There are even different types of dogs for different kinds of racing: sleek and speedy dogs are the stars of sprint racing, which features fast finishes on short courses that often weave through towns and cities over multi-day events; and in distance racing, the dogs are truly a different breed, built for mushing marathons that cover hundreds of miles and different regions, testing the dogs and drivers with the unique challenges of Alaska’s varied terrain and often-vicious winter weather.

Each require different equipment and racing tactics, while both take skill, dog safety and a savvy and toughness, as well as a deep commitment to the sport and the lifestyle. In the typical musher’s world, these are a lot of mouths to feed and even winning an event purse barely add up to a year of dog food. Those who break even or carve out a living from the sport of mushing dogs are a grateful few. Even rarer are those who become rich from racing. The most popular and prosperous racers can make extra money breeding their lineage of winning dogs and selling them to other racers, and even offer tours of their kennels and summertime rides to star-struck visitors.

Even in its early days, sled dog racing created legends – humans and canine – whose fame still echoes across Alaska and beyond. Leonhard Seppala, an All Alaska Sweepstakes all-star, and his lead dog Togo are among the first and finest. Togo came to fame as the lead of Seppala’s team that partook in the lifesaving 1925 run along a portion of the established-yet-incredibly-challenging Iditarod Trail, delivering diphtheria serum from Nenana to Nome’s residents during a pandemic. That run also made a canine hero of Gunnar Kassen’s lead dog, Balto, who led his musher, canine teammates and critical cargo through hardcore winds and winter weather to conquer the final miles of trail into Nome. In the ultimate show of sports reverence, Balto and Togo both have Alaska statues in their likenesses.

Balto and Togo’s now-fabled journey was the foundation of today’s Iditarod Trail Sled Dog Race. Fittingly, the first version of the race in 1967 was named the “Iditarod Trail Seppala Memorial Race”. The Iditarod race as it’s known today began in 1973. Even the race’s founder, Joe Redington Sr., is synonymous with sled dog racing. He’s known as the “Father of the Iditarod,” having created the event as a way to honor the old legends and keep Alaska’s sled dog racing tradition alive. But he wasn’t just a behind-the-scenes organizer – he was also a rugged racer who competed 17 times and even ran it after turning 80. The legacy, glamor, commitment and tests of physical strength and mental fortitude of sled dog racing are all woven deeply into the Iditarod, which is now Alaska’s, and arguably the world’s, most famous sled dog race – it’s even known as “The Last Great Race.” It has created many heroes, as well: Rick Swenson dominated the race in the late ‘70s and early ‘80s, won the race in three different decades (he won the 1991 event), and is a five-time winner, which is tied for the most ever. He missed one, though, when he was edged at the finish line in 1978 in the most dramatic Iditarod ever, losing by one second, or a dog’s nose, to Dick Mackey.

Dallas Seavey is the modern day Iditarod superstar and something of dog mushing royalty. He is the youngest racer to ever compete, starting the 2005 race just one day after turning the mandatory 18; he’s also the youngest to win the race (he was 25 when he won in 2012); and he’s won a total of five times, tying Swensen, including the most recent running in 2021. Oh, his father, Mitch Seavey, is a three-time Iditarod winner, and his grandpa, Dan Seavey, was an Iditarod regular. Libby Riddles was the first woman to win the race in 1985, setting the stage for Susan Butcher, arguably the most beloved of Alaska’s mushers and a genuine international sports star. She won the race four times in five years. Butcher is joined in the four-win club by Jeff King, Martin Buser, Doug Swingley and Lance Mackey (Dick Mackey’s son). Sadly, Butcher passed away in 2006 after a battle with leukemia. Now, the first Saturday in March in Alaska is known as “Susan Butcher Day,” typically the day the Iditarod begins its ceremonial start in Anchorage.

For all of the pomp and popularity of the Iditarod, the Yukon Quest counters as perhaps the toughest sled dog race with little glamor but plenty of grit. There are hundreds of miles of trying travel between Fairbanks and Whitehorse in Canada. This race covers some of North America’s coldest weather, harshest winter conditions and loneliest regions and its racers, and dogs, have to be as tough as the conditions to make it.

Meanwhile, sprint sled dog racing events are fast, furious and fan-friendly. The most popular Alaska sprint races include the Fur Rendezvous Open World Championship, which draws racers from around the world who literally run the streets of Anchorage, Alaska’s largest city. That same energy, and many of the same ultra-competitive racers, also compete in the Open North American in the streets of Fairbanks. And throughout the year, there are also numerous Iditarod and Yukon Quest qualifying races around the state and local racing clubs and circuits in many Alaska communities. These community groups connect young up-and-comer dog mushers and emerging sled dog kennels, a few “past-their-prime” dog teams and mushers, and lots of weekend warriors who just love running their dogs.

If you’re visiting Alaska in the winter, it’s likely there’s a team of dogs pulling a sled and musher in a race somewhere nearby. Come check out the action!