Popular Nicknames for Alaska Towns: Did You Know?

Home » History and Trivia » Popular Nicknames for Alaska Towns: Did You Know?

What’s in a name (or in this case), a nickname?

When it comes to cities, towns and villages across Alaska, the names for Alaskan towns often honor Alaska Native heritage and languages – Nenana, Kenai, Skwentna, to list just some of three of hundreds! Other Alaska town names pay tribute to great – and infamous – pioneers, politicians and personalities, such as Petersburg, McGrath, and Girdwood. Then there are towns named for places that celebrate Alaska’s unique landscapes and wildlife, like Bear Creek, King Cove and Willow. And in some cases, town names in Alaska come from strange and ridiculous sources, like North Pole, Deadhorse, and Chicken. Finally, many go literal and obvious, such as Big Lake, Central, Arctic Village, and Cold Bay, and at least one still having its origin debated even to this day, like the famous outpost of Nome on the Bering Sea.

But just as interesting as the names of Alaska’s most popular towns… are their nicknames. When it comes to the state’s largest city, Anchorage, the origins of this urban mecca may seem obvious. An anchorage is literally a safe place to anchor your boat. The name itself was actually selected only after eliminating three more commonly-used candidates for the then-busy tent town: Woodrow, Ship Creek and Knik Anchorage. Ultimately Knik was dropped by the U.S. Postal Service in 1915 and Anchorage stuck like an anchor in the mudflats. As for Anchorage’s nicknames, there are also plenty. The most well-known is “The City of Lights and Flowers” derived from the sparkling light displays that blanket and brighten every corner of the municipality during dark winter nights. This moniker could also apply based on the tradition of planting colorful flowers and flower baskets hanging seemingly everywhere in Anchorage in the summer. In fact, another nickname for the city is “The Hanging Basket Capital of the World“. Anchorage is also known as “The Air Crossroads of the World” for its airport’s increasingly bustling plane traffic and the city’s prime global location along strategic shipping routes. Locals and other Alaskans also occasionally refer to Anchorage as “Anchortown“, while Alaskans who prefer the state’s less-populated locales jokingly call it “Los Anchorage“. 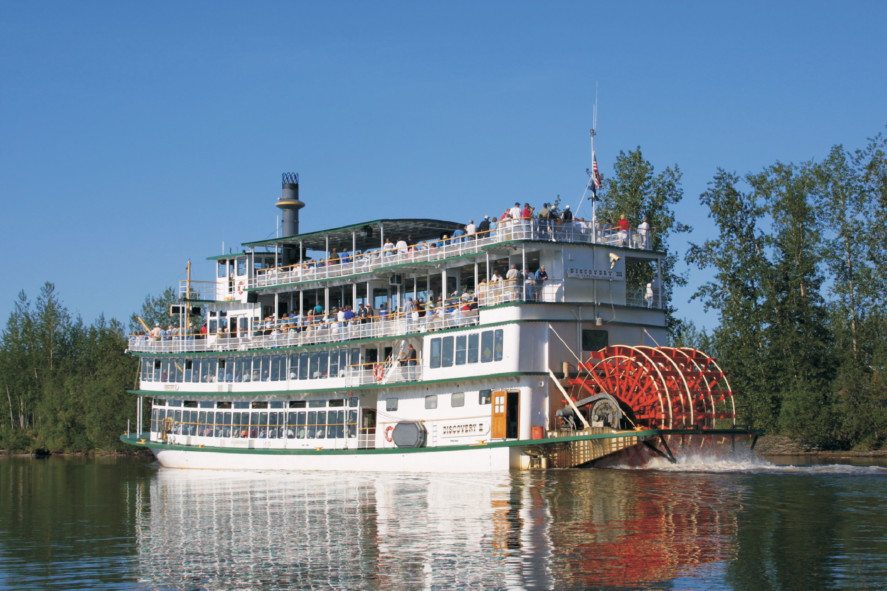 The origin of Fairbank’s name s is much easier to track. Fairbanks was named by a popular Alaskan settler as a nod to Charles W. Fairbanks, a Senator from Indiana who was believed to be a friendly supporter, nicely placed politically, if the town ever needed a hand. That was a questionable assumption, at best. But over the years, Alaskan locals and visitors alike prefer to think Fairbanks received the name for being a pretty little town with a pretty little river running through it. That’s especially true in the Midnight Sun-lit summers, of course. Fairbanks certainly has a fitting, if not perfect, nickname: “The Golden Heart City“. Golden for its gold mining legacy; Heart as in its setting in the center of Alaska; and Golden Heart as in being very hospitable to locals and visitors alike. Seward, Alaska is named after the man who negotiated the purchase of Alaska from Russia in 1867: William H. Seward, the U.S. Secretary of State under Presidents Abraham Lincoln and Andrew Johnson. William Seward had a notable political career and fascinating life, but for a brief time, Americans had buyer’s remorse over his famous territory purchase and dubbed Alaska “Seward’s Folly.” If they could only see the beautiful little waterfront town eventually named after him, they’d change their minds. Today, Seward is known as “the Gateway to the Kenai Fjords“, which in itself is a national natural treasure. Others have given the hamlet a simple and sweet motto: “Alaska Starts Here“. For many nugget-crazed miners heading north in the wild Gold Rush days, Alaska actually started in Valdez, home to America’s northern-most ice-free port, Port Valdez. Many years before the Gold Rush, around 1800, Spanish explorer Salvador Fidalgo arrived and named the port area in honor of a Spanish naval legend. The road to gold was a tough one from Valdez, but an undoubtedly beautiful aspect of the journey is the array of waterfalls in the region created, in part, by the unusually high annual snowfall and subsequent melt. Naturally, that earned Valdez the nickname of “The Land of Waterfalls“. Head just up the Richardson Highway from Valdez and you’ll soon see why. Wild waterfalls frame the roadway, all impressive, inspiring, and photo-worthy. Bridal Veil Falls and Horsetail Falls are the most popular and photogenic. Valdez is also known as “Alaska’s Little Switzerland” – again, not a surprise to the folks who live and visit there, especially in the winter. First, the mountains framing the area are spectacular any time of year; but in the winter, the town and region have an astronomical annual snow accumulation of more than 300 inches on average (and has had as much as more than 900 inches in a year)! That makes the Valdez area, much like Switzerland, a winter wonderland and playground for Nordic and alpine skiers, snowboarders, ice climbers, snowmachiners, hikers, snowshoers, snow angel makers, and just about anyone who loves playing in the powder. Homer may be named after adventurous gold miner and ambitious businessman Homer Pennock, but this charming Alaskan town is best known for an even richer bounty found in surrounding Kachemak Bay and Cook Inlet: Alaska’s finest fish. Homer is nicknamed “the Halibut Fishing Capital of Alaska” (though locals prefer to swap “Alaska” for “World”), and that’s certainly easy to understand in the summer when the town is hopping with giddy guides and fanatic fishermen proudly dragging in and weighing these big, beastly, super-tasty flounders. If you plan to see if the nickname holds true, don’t forget to buy a fishing license and a Homer Halibut Derby ticket before hitting the water. Beyond its fish fascination and sometimes feisty fishermen, Homer is also situated in a beautiful location which lends to its easy-going, good-times vibes. It’s popular with travelers, retired Alaskans, artists, cooks, hippies and homesteaders, many who prefer its unique style of Alaska living, and some who just want to live as close to the fringes of the grid as possible without going off entirely. No wonder it’s also known as “the Cosmic Hamlet by the Sea“. Visitors that stay long enough will probably see a beat-up pickup truck, rusting Subaru, or boat trailer sporting a bumper sticker with a nickname popularized by locals: “A quaint little drinking town with a fishing problem.”

Finally, if you’d like to learn more about Alaska trivia, don’t miss these stories: