Glaciers are both grand and abundant in Alaska, and there’s an extra-special Alaska destination where they aren’t just the main attraction, they’re also a namesake. Glacier Bay National Park and Preserve in Southeast Alaska is a world-renown travelers’ mecca. Glacier Bay’s park headquarters are based in Gustavus, Alaska, just west of Juneau and north of Hoonah at the end of Alaska’s infamous Inside Passage. This national park is packed with glaciers, of course, as well as being a virtual “checklist” of other notable Alaska natural and cultural wonders.

Here are the five “must see” reasons that make Glacier Bay National Park and Preserve a travel hot spot and “must see” destination for any Alaska visitor:

Reason 1: Five reasons to visit Glacier National Park? How about more than 1,000?

Glacier Bay National Park and Preserve is home to more than 1,000 tidewater and terrestrial glaciers, which weave and web across the park’s 3.3 million acres. Fifty of them are so famous and impressive that they are named glaciers. Park officials estimate that approximately 250 years ago, a single tidewater glacier covered all of Glacier Bay. This massive ice flow has since retreated 60 miles, but glaciers still cover 2,055 square miles or 27 percent of the park. Now that’s a lot of impressive ice! Whether you’re on a Glacier Bay cruise ship, a smaller tour boat cruise, in an even smaller water taxi or a single-person kayak, glacier sightings are practically constant while in the park and are always impressive from the water. Some possess a massive presence, like the renowned Carroll, Brady and Grand Glaciers. Others are tucked away in and above the many bays, inlets, harbors coves of the area. Watch carefully as the glaciers calve, releasing huge chunks of ice and creating crashes, splashes and icebergs that you’ll never forget. Glacier Bay National Park provides countless other awe-inspiring on-water and on-land sights besides its glaciers. Some of an Alaska travel experience’s best thrills come from seeing wildlife in their natural habitat, and Glacier Bay is home to quite the menagerie of Alaska animals. There’s marine wildlife like humpback whales and orcas, Harbor seals, Steller sea lions and sea otters, Harbor porpoises and even Leatherback sea turtles, as well as salmon and halibut among 300-plus fish species. On land, black and brown bears roam free along with mountain goats and moose, and many more mammals. Glacier Bay is also a bird-watcher’s paradise with nearly 250 bird species, including the awesome Arctic Terns, whose travel plans take them on the longest migration of any birds, from Glacier Bay to Antarctica. Many lifetimes of glacial advancement, retreating and melting have created, crafted and carved numerous lakes and rivers in Alaska. Six 10,000-foot-plus mountains and many not-as-tall-but-still-pretty-huge peaks tower above the park and the area’s lush green rainforest landscapes feature nearly 600 kinds of plant species. Even the ecosystems of the park are varied and fascinating, certified by its “Biosphere Reserve” designation from wet tundra, Alpine tundra, coastal forest to, of course, glaciers and icefields. Sightseeing through Glacier Bay National Park on board a marine vessel makes for an incredible Alaska trip. Step off your boat and stay in the park for a while to really discover authentic Alaska. You can go hiking trails near the busy Bartlett Cove, explore deep into Alaska’s vast backcountry and/or wander along more than 700 miles of shoreline in the park that provides visitors with spectacular kayaking and camping opportunities. Don’t feel like paddling or hiking? Take a more leisurely flightseeing tour or a catamaran ride around the area, both of which will knock your socks off. The Alaska fishing in Glacier Bay is predictably world-class and there are professional fishing guides who will help you experience the best of it. Where can you you stay? Your Alaska lodging choices include the renowned Glacier Bay Lodge in Gustavus, 33 campsites in Bartlett Cove, one public use cabin in Dry Bay, and a few other lodging options in Gustavus. No matter what you do or where you do it in Glacier Bay, take a moment to breath in this special place. And be sure to look down – you might see a berry patch on land or a dolphin racing your craft on the water. 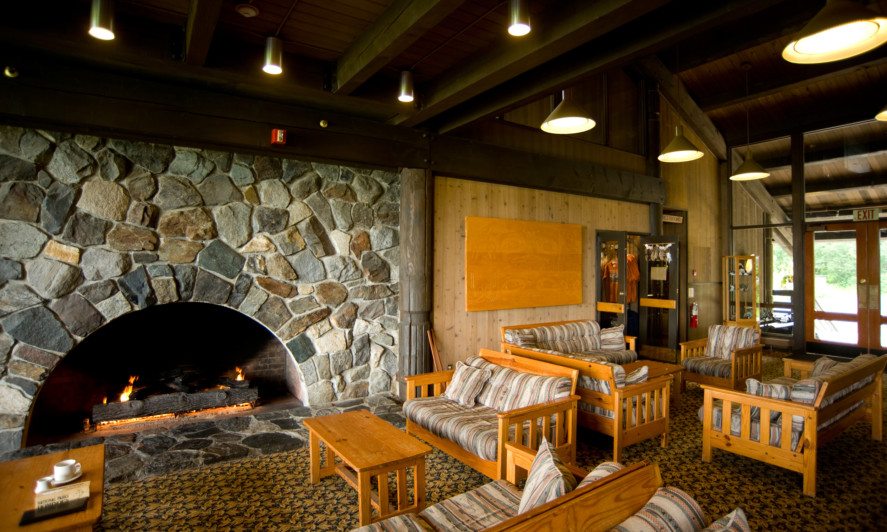 Glacier Bay National Park is located in the heart of Southeast Alaska, home of the Huna Tlingit people and a place where Alaska Native culture and lifestyles remain vibrant and visible, proud and prominent. Park visitors can experience the regional culture and conversations with locals at the Huna Tribal House near Gustavus in Bartlett Cove, which opened in 2016. Inside this cultural center are celebrations of language, art, drumming, dancing, storytelling and traditional food and dress while outside, stand Raven and Eagle totems and a Healing Pole. These native art works greet park visitors and are the backdrop for ceremonial events hosted at the house which also features a number of impressive and intricate cedar carvings. The relationship between the area’s people and the National Park Service is complicated: it was strained for many early years when the park and its laws were established, and enforced, by the federal government. Time, improved communications and a deepening respect for the region’s first people and their history have mended this relationship, which eventually turned it into more of a partnership when, in 1995, the National Park Service and Hoonah Indian Association signed a Memorandum of Understanding to establish stronger communication and working relationships. In 1979, Glacier Bay was part of the group of bordering parks to Kluane, Wrangell-St. Elias and Tatshenshini-Alsek that were named a UNESCO World Heritage Site, in part because of the Alaska Native history and culture of this area and in 1992, Glacier Bay National Park itself was named a World Heritage Site. Reason #5: Science with the scenery.

Some Glacier Bay National Park and Preserve visitors arrive to work, not play. Since 1879, when legendary explorer and curious scientific mind John Muir started exploring the area to better understand the power and prowess of glaciers, scientists, geologists, biologists, surveyors and a range of researchers have made the park, with its many natural marvels and mysteries, their one-of-a-kind “living laboratory.” In 1925, following a stretch in the area getting to know its plant life, botanist William S. Cooper partnered with the Ecological Society of America to convince President Calvin Coolidge to make Glacier Bay a National Monument. Since then, visiting biologists, geographers and assorted scientists of all passions and professions have studied everything from Glacier Bay’s wildlife and marine life like bears and whales; to the birth and evolution of area waterways created by melting glaciers; to the Park’s fragile-and-powerful landscapes, geology and ecosystems; to the region’s Ice Age roots and to countless other pursuits of natural knowledge. Today, a sharp scientific focus lies around the current and future impacts that global warming – and the warming temperatures around the region – are having on the park’s glaciers, inhabitants, and other natural features. It’s easy to learn about this expanding body of technical scientific work during a visit to the park, where you may just meet a professional or see one at work, and through widely available research publications, on-site symposiums, online reports, excellent books, and more.

If you’re thinking of visiting Glacier Bay, you’ve got so many wonderful ways to do it. Browse away and then give us a ring. We can give you our Alaska experts’ best recommendations!