Winter in Alaska is an exceptionally noteworthy experience. As temperatures drop and daylight dwindles to just a few hours a day, out of the quiet and peaceful atmosphere, a green glow begins to blanket evening-to-morning landscapes. Large ribbons of light materialize in the sky, stretching across the horizon and reaching high into the atmosphere. These celestial displays move slowly at first but then begin to dance. Pink colors ripple across the green canvas as the ribbon undulates and pulses. A few minutes later, the lights can entirely dissipate until the sky is still once more.

The “Aurora Borealis”, also known as the Northern Lights, is a natural phenomenon that occurs around Earth’s far north latitudes. Around the south pole, these lights are known as the “Aurora Australis”. They become visible during solar storms as particles from beyond the earth’s atmosphere interact with gases such as oxygen and nitrogen. 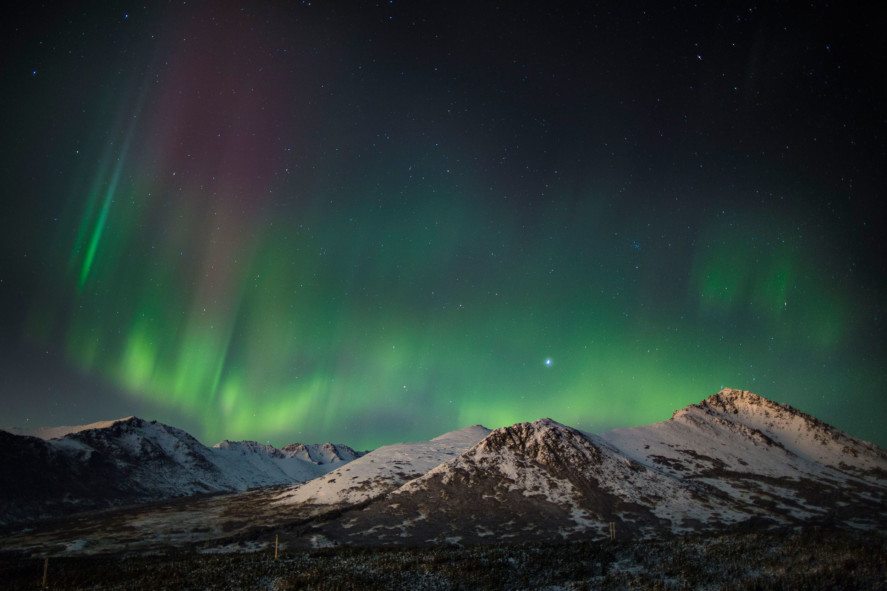 The Northern Lights have inspired mythology around the world, especially in civilizations of northern regions.

In Greenland, the native tribes believed that the lights of aurora borealis sprang from the spirits of children and stillborn babies. This myth makes a lot of sense considering the hardships endured by Inuit families living in such harsh arctic conditions. These legends in Greenland associating the lights with the souls of those departed, likely provided to comfort to the living with these spirits dancing, waving, and continuing to communicate with the living.

The Saami people of Norway respected the northern lights but also believed they were dangerous. In their culture, Saami are taught to avoid drawing their attention for fear of being harmed by the lights or pulled into the sky by them.

And according to Viking legends, the Northern Lights were the armor of the Valkyries as they escorted fallen warriors to Valhalla to fight alongside Odin. Vikings believed that the gods would fight one final battle (Ragnarök) that would determine the fate of the planet.

One of the most famous legends behind the Northern Lights is that of the firefox. This mythical creature in Scandinavia would supposedly bring fame and good luck to whomever could catch it. As the fox runs across the snowy landscape, his tail is said to release sparks and fire into the sky, resulting in the trailing ribbons of green light that we know so well.

Russia is a vast and icy landscape in the winter, and it is no surprise that the people who live there have created a few myths of their own about the Northern Lights. They believed that the colors and lights were the result of battles between giant fire dragons. This belief prevalent in Russia is also shared by the Chinese (although they do not see the Aurora as frequently as their northern neighbors).

Across the Sea of Japan, the Japanese believe that conceiving a baby under the Northern Lights will result in a child born with good fortune. Many tribes in North America from regions in Canada, North Dakota, and Alaska believe that the northern lights are the dancing spirits of departed loved ones or enemies returning for a visit. We are now learning that the electrical charge associated with the Aurora Borealis can cause occasional sounds, such as crackling or popping. Indigenous tribes believed these noises were spirits trying to communicate with the living.

In ancient Greece, people believed that the Northern Lights were trails left behind by the goddess Aurora, who drove her chariot through the sky each morning to bring dawn. Since the lights can only be seen at night and the early hours of dawn, this was their explanation for why these mysterious lights appeared. The Science Today Behind the Origin of the Northern Lights

Sunspots are regions of the sun with high heat and magnetic activity. The sun, our largest star, experiences atmospheric disturbances like the storms that frequent planets, such Earth and Jupiter (famous for the Great Red Spot, an ongoing 360-year-old cyclone). These sun storms send magnetic particles called electrons, into space. Roughly two weeks later, these charged particles collide with the Earth.

The Earth’s magnetic field is the first shield to connect with the electrons as it deflects them, which is why the Aurora Borealis only occurs on the poles. In fact, other planets with strong magnetic fields also experience auroras, like Neptune, Jupiter, and Saturn. Different chemicals in our atmosphere then interact with these particles, causing the beautiful colors we all know and love. Oxygen causes the lights to appear green, while nitrogen gives off blue and red light. Other gases, such as hydrogen and helium, can cause purple. However, the colors of the auroras can also change based on the height in the atmosphere in which the auroras are occurring.

It is easy to see why the Northern Lights have caused such a stir in northern civilizations in our history. Myths and legends keep this history alive, much like the interactions of human beings with other natural phenomena like earthquakes, volcanoes, and sudden weather events like hurricanes and tornados. Thanks to modern science and technology, however, we have been able to find many answers explaining the science behind the beautiful Aurora Borealis.

Discover when and where to see the northern lights in Alaska and 10 Facinating Facts About the Aurora Borealis.