Just 4 hours south of Anchorage on the Kenai Peninsula, the seaside town of Homer is one of Alaska’s ‘must-see’ destinations especially if you are traveling by car on an Alaskan road trip.

Here are five great reasons to include Homer in your Alaska vacation itinerary:

#1 – Homer is the ‘Halibut Fishing Capital of the World’

Homer boasts of being the “Halibut Fishing Capital of the World” and its reputation as such is well deserved. In fact, Homer is Alaska’s sportfishing hotspot not just for halibut but also for other saltwater favorites including king salmon, lingcod and rockfish. The city’s protected harbor on Kachemak Bay provides the perfect fishing venue for both sportfishing enthusiasts and commercial fishing vessels alike.

Anglers can book both full-day and half-day halibut sportfishing charters easily  out of Homer with the peak fishing seasons for halibut and king salmon extending from May to October, for red salmon June to July, and for silver salmon, a bit later in July and August. In addition to the ‘Halibut Fishing Capital of the World’, Homer has another nickname: ‘The End of the Road’. Homer is located on the Southcentral Alaska coast at the very end of the Sterling Highway. Motorists can only drive a few miles further by taking Homer Spit Road out onto the narrow, four-mile strip of land known as the Homer Spit.

This peaceful seaside location offers the Alaska visitor plenty of beaches, including the Spit itself, as well as Bishop’s Beach closer to downtown. These beaches offer great opportunities for wildlife viewing and beach combing, though beach-goers will likely want to wear a windbreaker jacket rather than a swim suit!

Just north of Homer is the small community of Anchor Point, only 14 miles up the Sterling Highway. Anchor Point is famous for being the western-most point in North America that anyone can drive to on a continuous road system. A road-trip from Lubec, Maine (the easternmost point of the United States) to Anchor Point would be a leisurely 82-hour drive. #3 – Homer is the Gateway to Two National Parks

Homer is a great starting point for additional trips into not one, but two of Alaska’s popular national parks: Katmai National Park and Lake Clark National Park. But neither of these parks are connected to Alaska’s road-system, making them largely remote and inaccessible in comparison to other national parks like Denali or Kenai Fjords. Fortunately, flightseeing trips to both of these national parks are available from Homer for visitors seeking to explore Katmai and Lake Clark to see more of Alaska’s wild backcountry.

Wildlife enthusiasts interested seeing brown bears in their natural habitat, for example, might enjoy our 6-hour Bear & Wildlife Viewing Flight Safari from Homer. This flight tour lands in either Katmai or Lake Clark National Park (depending on the season) to view brown bears from a safe distance as they fish, dig for clams or roots, play with their cubs and go about their day. #4 – Homer is Rich in Alaskan History and Culture

Homer is located near Kachemak Bay within the traditional Alaska Native lands of the Dena’ina and Alutiiq peoples. The town got its start in the 1890s as a coal mining town, due to the substantial coal deposits found in the Kenai Peninsula. Later, Homer was one of the many coastal Alaskan communities damaged in the infamous 1964 Good Friday Earthquake, the largest earthquake in American history. Damage from the earthquake caused sections of the Homer Spit to sink into the ocean.

The Pratt Museum in Homer offers excellent exhibits for visitors interested in learning about the history of this Southcentral Alaska region. The museum covers the Alaska Native cultures of the area as well as Homer’s homesteading and fishing heritage.

One favorite historic site for locals and visitors alike is the Salty Dawg Saloon on the Homer Spit. The building was originally constructed in 1897 as one of the first cabins in Homer, but over the years was used variously as a post office, grocery store and schoolhouse, among other pursuits. In 1957, it relaunched as the ‘Salty Dawg Saloon’ and has remained the most identifiable landmark in Homer ever since. 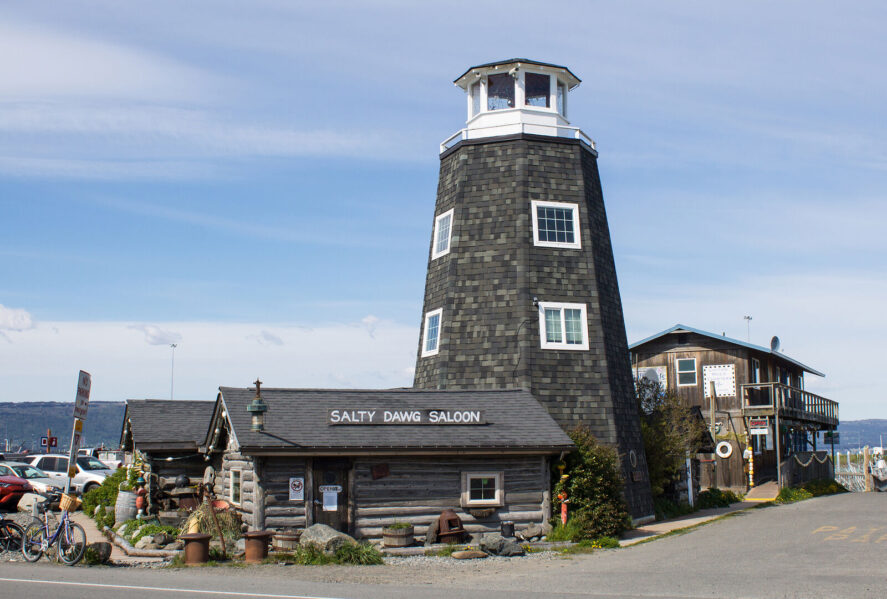 While it’s famous for its fish, Homer is also a major destination for birders and other wildlife enthusiasts. Over 100 different bird species can be spotted in Homer and the surrounding Kachemak Bay area. Major species in the area include bald eagles, ravens, cormorants, puffins and sandhill cranes.

The annual Kachemak Bay Shorebird Festival is hosted in Homer each spring, and birders from around the world flock to the little fishing town with their binoculars and cameras ready. Birders spotted 134 different species of birds during the 2022 festival.

Homer is also home to the Islands and Oceans Visitors Center, which is open year-round, with daily programs by the U.S. Fish & Wildlife Service from June through August. The center offers exhibits on Alaska’s oceans and coastal wildlife species in Kachemak Bay and the Aleutian Islands, as well as Alaska Native history in the region. If you’re planning a self-drive route in Alaska sometime soon, don’t miss a stop in Homer